“Greece: the cradle of Western civilization”, “Athens: the birthplace of democracy”, “Greece: home to the Olympic Games”, we’re all familiar with these quotes and sayings, right?

We’ve heard, maybe, that Hippocrates is the father of Western medicine, Socrates, Plato  and Aristotle are the father’s of Western philosophy, Thespis was the first recorded actor (hence The Thespians), and Homer, (The Iliad and The Odyssey) and Herodotus (The Histories), were the first historians, and surely, we all know a bit about Greek mythology.

Did you know though, how many useful inventions, still in use today, have ancient Greek origins?

Yes! The Greeks did it first (and better!), and here are twenty amazing Greek inventions to prove it!

In no particular order 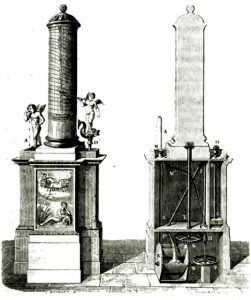 The alarm clock or water clock (which didn’t seem to catch on with the Greeks who are renowned for their tardiness!), was used to measure time, and also to make sure speeches given in the courtroom, or by long-winded politicians didn’t go on forever!

Called a clepsydra (water thief), this was the most accurate clock in the world up until the use of the pendulum.

Invented by Ctesibus (285 – 222 BC) from Alexandria, Egypt, the father of pneumatics, an inventor and mathematician, who started his career as a barber.

The original vending machine, for holy water.
Invented by Hero of Alexandria

The first vending machine was invented by Heron, or Hero, of Alexandria (10 – 70 AD), a mathematician and engineer.

A coin, inserted into the top of the machine, dropped onto a pan which was attached to a lever, which then opened a valve, allowing, wait for it, holy water to flow.

Antikythera Mechanism,
an astronomical calculator, raised from a shipwreck in 1901

Forget all you know about Apple, Bill Gates and Microsoft, the very first computer, an analogue computer, was found by sponge divers concealed in the wreckage of a ship, off the shore of the Greek island of Antikythera in 1901.

Said to date back to around 87BC, the Antikythera mechanism, as it’s known, was encased in a wooden box, and  consisted of  a clockwork mechanism of about thirty bronze gears and was used to calculate astronomical positions and eclipses, for use in calendars, and other astrological goings on.

The Antikythera Mechanism is now kept at the National Archaeological Museum in Athens, Greece.

Temple of Artemis at Ephesus – 16 century engraving by Martin Heemskerck

Before the Romans came up with the hypocaust system, the ancient Minoans of Crete had already invented the first, underfloor central heating.

One example of ancient central heating was discovered at the Temple of Artemis in Ephesus, one of the Seven Wonders of the World, (Today modern Turkey).

Again, as with central heating, the ancient Minoans of Crete, were the first civilizations to have underground pipes, carrying water.

Ancient Greek pottery depicting the first showers, which were
invented by the ancient Greeks.

Showers, in the form of communal shower rooms, cold water only, the Greeks believed cold water toughened the skin, have been found at the ancient site of Pergamon, an ancient Greek city of Aeolis (along the west and northwest coast of Asia Minor).

The Romans refined the ancient Greek shower system and made use of it in their many baths and spas.

The first automatic doors,
invented by Heron of Alexandria.

Heron of Alexandria, of vending machine fame, came up with the idea for automatic doors; a steam powered hydraulic system, using air heated by fire, opened the very first automatic doors belonging to a temple in Alexandria.

Map of Piraeus, showing the grid plan of the city 1908

Hippodamus of Miletus, a rather eccentric character, (498 – 408 BC), was an ancient Greek architect, urban planner, physician, mathematician, meteorologist and philosopher, considered to be the Father of European Urban Planning.

Hippodamos drew up plans for the city of Piraeus, (the port of Athens) at the request of Pericles, (Statesman and general of Athens).

According to the ancient philosopher, Aristotle, Hippodamos was the first urban planner to focus attention to proper arrangements of cities.

The first lighthouse, The lighthouse, or Pharos, of Alexandria, Egypt, one of The Seven Wonders of the World, the tallest manmade structure for centuries, at 120 meters tall, was built by a Greek, Sostratus of Cnidus, between 280 and 247 BC.

Pharos, the location of the lighthouse, was a small island on the western edge of the Nile Delta, opposite the city of Alexandria, and for this reason the word for lighthouse in Greek is pharos. Forgive me for thinking that someone named Stephenson invented the steam engine, I’m sure I remember something called Stephenson’s Rocket!

Anyway, it wasn’t him, it was our friend Heron of Alexandria again, an the one who invented the first automatic doors and the vending machine.

Called an aeoliplie, or the Hero engine, it’s a simple, bladeless steam turbine which spins when the central water container is heated.

The first spiral staircase was discovered in one of the five ancient Greek temples
at the Ancient Greek city of Selinunte, Sicily, Italy.
Photo: Getty images Fr

The first spiral staircase ever to be discovered was found in one of the five temples of Selinunte an ancient Greek city, one of the most important Greek colonies in Sicily, founded in around in 654 BC.

The Tower of the Winds, also called horologion (timepiece) is an octagonal Pentelic marble clock tower, located at the ancient agora, under the Acropolis, Plaka, Athens.

The ancient “Tower of the Winds”, located in the ancient agora, below the Acropolis, in Plaka, Athens, is the first known clock, tower.

The tower, twelve meters tall, which was driven by water flowing down from the Acropolis, dates back to 100 BC.

Only the tower, which housed a water clock, with eight sun dials and an astrological calendar around the exterior, and a wind vane on the top, remains, the mechanism has disappeared.

Relief representing Anaximander (Roma, Museo Nazionale Romano). Probably Roman copy of an earlier Greek original. This is the only existing image of Anaximander from the ancient world.

Cartography, the art of map making, was first practiced by Anaximander of Miletus (610 – 546), who created the first map of the world, and was the first to approach the use longitude and latitude. 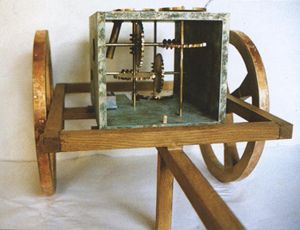 Heron’s odometer was most probably an invention made by Archimedes.

The world’s first odometer, “Heron’s odometer”, used to measure distance travelled by car or bicycle, or, in those days, I suppose, a donkey, was first described by Vitruvius, a Roman military engineer.

Vitruvius thought it to be the work of Heron of Alexandria, but evidence shows it was actually invented by Archimedes of Syracuse (287 – 212 BC), ancient Greek mathematician, physicist, engineer, astronomer and inventor.

“The Hydraulic Wheel of Perahora”

Excavated in Perahora, Loutraki (on my doorstep!), which used a horizontal wheel and two millstones.

This is the earliest known water driven mill, and was attributed to Philo of Byzantium (280 – 220 BC), also known as Philo Mechanicus, a Greek engineer and physicist.

stone Greek anchor was discovered in La Baie d’Anao (Beaulieu)and dates back to the 6th century BC.
It’s on display by the harbour where it was found – Beaulieu-sur-Mer.
Photo:Monte Carlo Daily

It’s not surprising, that the ancient Greeks, famous seafarers and builders of some of the first boats, known for their long sea voyages, in boats that could not be brought to shore, were the first to create anchors, using buckets filled with boulders, and later metal, that eventually took on today’s anchor-shape. 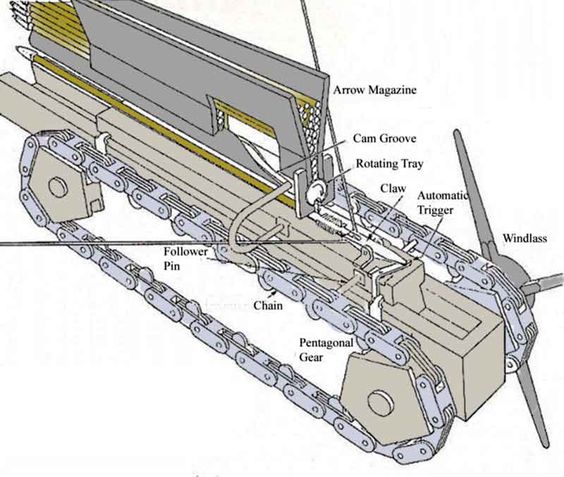 The catapult, which dates back to the third century, and various other ancient Greek artillery, such as the ballista, a Greek projectile weapon, used in the wars of Ancient Greece, so ahead of its time, it was used until the middle Ages.

The cannon, associated with Ctesibius of Alexandria and the Gastraphate (the forerunner of the catapult) a hand held large crossbow, were all invented by the ancient Greeks.

Hipparchus of Nicaea (190 – 120), Greek astronomer, geographer and mathematician (he was the founder of trigonometry), invented several astronomical instruments( as well as cataloguing 850 stars).

Hipparchus invented the celestial globe and the equatorial ring, used to observe solar equinoxes, but his most famous invention was the astrolabe, used to identify stars and planets.

Cheesecake was invented thousands of years ago by the ancient Greeks!
Photo: sugarapron.com

I left the best until last, the delicious dessert, well-known the world over, and still enjoyed today by millions; the cheesecake, was invented by the ancient Greeks!

Cheesecake was eaten by the ancient Greeks as far back as the fifth century BC, thought to be a source of energy; it was given to athletes, competing in the first Olympic Games, 776 BC, to give them strength.

Ancient Greek physician, Aegimus even wrote a book about the art of making cheesecake.

The the oldest known surviving Greek cheesecake recipe was made by the writer Athenaeus in 230 A.D:

“Pound the cheese until it is smooth, mix it in a brass pan with honey and spring wheat flour, heat the cheesecake in one mass, allow to cool, and then serve.”

After conquering Greece, the Romans adopted the Greek cheesecake, modified it and called it “libuma”.

So, the next time you are caught up in an automatic door, your plumbing goes on the blink, or your alarm clock fails to wake you, you know what to do:

Blame it on the Greeks!