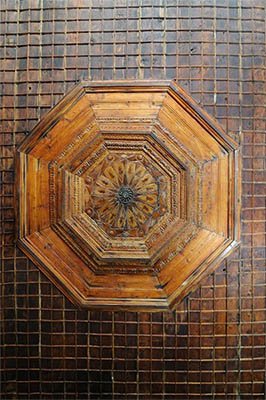 Bouboulina! An illustrious name that arouses feelings of patriotism, sacrifice and bravery in the heart of every Greek. She is the celebrated heroine of the sea, one of the most famous figures in Greek history. The Museum was founded in 1991 by Mr. Philip Demertzis-Bouboulis, Bouboulina’s fourth generation descendant, in his effort to save the mansion from collapse. A non-profit making company manages all the Museum income, and has as its main objective the repair and maintenance of the building and its use as a museum and cultural centre, whilst at the same time recounting the story of the Greek War of Independence with emphasis on the life of the heroine Laskarina Bouboulina.
A Mauritanian architect built the mansion of Bouboulina towards the end of the 17th century. The plan of the house from above is that of the Greek letter Π. This shape, in Spetsiot architecture, was related to the importance of its owner. Most of the Spetsiot lords of the time had houses of this shape. The mansion consists of a ground floor with two floors above. An external stone staircase connects the front yard with the first floor, where the museum is housed. Visiting areas on the first floor consist of four large rooms.
The visitor will admire the hand carved Florentine ceiling and the mainly Italian and French furniture of the 18th and 19th century. There is a display of old firearms and swords and among them Bouboulina’s own gold plated pistol.
The safe of her flagship the Agamemnon, with its three keys and eight locks, is in prominent position. Portraits of the heroine and her descendants are hanging on the walls along with a well-known oil painting picturing the heroine in one of her attacks against the forts of Nafplion.