The fall of Constantinople, which happened on may 29, 1453, was the last phase of the Byzantine-Ottoman Wars (1265-1453) and the darkest page in the history of Greece and the orthodox church. 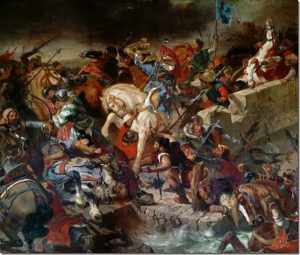 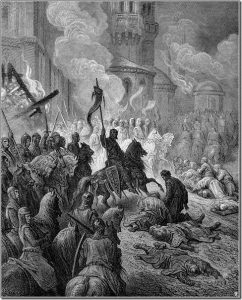 Right after the capture of Constantinople, Sultan Mehmed II issued a decree on “giving freedom to all who stayed alive”, however, many residents of the city were beaten by Turkish Soldiers, many became slaves. For the speedy recovery of the population, mehmed ordered to transfer to the new capital all the population of the city of aksaray.
The Greek Sultan has given the rights of the self-governing community inside the empire, in the head of the community was to stand patriarch Constantinople, responsible for the sultan.
In the following years, the last territories of the empire were occupied (Morey – at 1460).
Consequences of the death of byzantine
Konstantin Xi was the last of the emperors of romeev. With his death, the Byzantine Empire stopped its existence. Her lands were part of the ottoman state. The former capital of the Byzantine Empire, Constantinople, became the capital of the ottoman empire until its collapse in 1922 (first it was called a Constantine, and then Istanbul (Istanbul)).
Византия имела огромный авторитет как родина и опора Православия, восточной ветви христианской религии.
Most Europeans believed that the death of Byzantine was the beginning of the end of the world, as only byzantine was the successor of the Roman Empire. Many contemporaries accused Venice of the fall of Constantinople (Venice then had one of the most powerful fleet). The Venetian Republic Has LED a double game, trying on the one hand to organize a crusade against the Turks, and on the other – to protect its trade interests, sending to the SULTAN FRIENDLY EMBASSIES.
However, it is necessary to understand that the rest of the Christian powers and finger have not been your to save the flexible empire. Without the help of the rest of the states, if even the Venetian Fleet arrived in time, it would allow the Constantinople to hold a couple more weeks, but it would only prolong the agony.
Rome fully understood the Turkish danger and understood that all western Christianity could be in danger. Pope Nicholas v called on all western powers together to take a powerful and decisive crusade and intended to lead the hike himself. Even since the birth of Constantinople came from Constantinople, he sent his messages, calling for active action. September 30, 1453 The Pope sent to all western state the bull with the announcement of the crusades. Each state has been ordered to shed the blood of its own and its subjects for the holy cause, as well as to highlight the tenth part of its income. Both Cardinal-Greek – isidore and visarion – actively supported his efforts. Visarion Himself wrote to the venetians, at the same time accusing them and begging to stop the wars in Italy and concentrate all their forces on the fight against the antichrist.
No Crusades, however. And although the state authorities were greedy about the death of Constantinople, and the writers composed the bitter elements, although french composer William Dûfé wrote a special funeral song and was singing in all french lands, no one was ready to act. The King of Germany Friedrich III was poor and powerless, because he did not possess the valid power over the German princes? Neither the political nor the financial side could participate in the crusade. The King of France, Karl VII, was busy rebuilding his country after a long and devastating war with England. 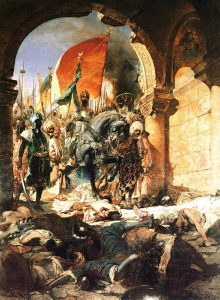 The Turks were somewhere far away? He had things more important in his own house. England, which was affected by the years war even more France, the Turks seemed even more remote. King Henry vi could not do decisively anything, as he just lost his sanity and the whole country plunged into chaos wars of eloy and white rose. None of the kings have shown their interest, except for the hungarian king vladislav, who, of course, had all the reasons to worry. But he had a bad relationship with his army commander. And without him and without allies, he could not take care of any enterprise.
Thus, although western Europe was shocked by the fact that the great historical Christian City was in the hands of the unbelievers, no papal bulla could drive it to action. The fact that Christian states failed to help constantinople showed their clear reluctance to fight for faith if their immediate interests are not affected.
The Turks quickly took the rest of the empire. Serbs were the first to suffer – Serbia became a theatre of military action between Turks and hungarians. In 1454, serbs were forced to be threatened by the use of force to give the sultan part of their territory. But already in 1459, the Turks had all Serbia, with the exception of Belgrade, which until 1521 remained in the hands of the hungarians. The neighboring kingdom of Bosnia, the TURKS WON 4 years later.
Meanwhile, the last remnants of Greek independence have gradually disappeared. The Duchy of Athens was destroyed in 1456 And in 1461 the last greek capital was pala – trabizon. It was the end of the free Greek world. True, a number of Greeks still remained under the Christian rule – in Cyprus, on the islands of the aegean and the ionian seas and in the port cities of the continent, while held by Venice, but their rulers were another blood and a different form of Christianity. Only in the South-East of peloponnese, in the lost villages of Maya, in the harsh mountain Spurs of which no turk was dare to penetrate, the likeness of freedom was preserved.
Soon, all the orthodox territories in the balkans were in the hands of the Turks. Serbia and Bosnia have been worked out. In January 1468, Albania fell. Moldova has recognized its enormous dependence on the sultan in 1456
Many historians in 17-18 BB. The fall of Constantinople was considered a key moment in European history, the end of the middle ages, like the fall of Rome in 476-the end of antiquity. Others believed that the mass fleeing of the Greeks to Italy caused a revival there.
Rus is the heir of byzantine
After the death of Byzantine, rus remained the only free orthodox state. The Baptism of rus was one of the most glorious acts of the Byzantine Church. Now this daughter has become stronger than her parent, and the Russians have confessed it perfectly. Constantinople, as relied on rus, fell in punishment for its sins, for the apostasy, agreeing to association with the western church. The Russians violently rejected the Florence and banished its supporter – the metropolitan of isidora, imposed by the Greeks. And now, keeping the clean of their orthodox faith, they have become the owners of the only one who has survived the orthodox world, whose power has constantly increased. ” Constantinople has fallen, – wrote the metropolitan of Moscow in 1458-because he left the true orthodox faith. But in Russia, this faith is still alive, – the faith of the seven cathedrals, which constantinople gave it to the great prince Vladimir. There is only one true church on earth – the church is Russian “.
After marriage with the niece of the last Byzantine Emperor from the dynasty of palaiologan, the grand prince of Moscow Ivan III declared himself the heir of the Byzantine Empire. From now on, the great mission of the preservation of Christianity has moved to Russia. ” Christian empires have fallen,-wrote in 1512 The Monk of philology to his lord grand prince, or king, Vasily III, – instead of them stands only the state of our Lord… two Rome have fallen, but the third is worth, and the fourth is not to be… you are the only Christian State in the world, Lord over all True faithful Christians
So, in the whole orthodox world, only Russians have learned some benefit from the fall of Constantinople? And for the orthodox Christians of the former Byzantine, who are standing in the captivity, the consciousness of the fact that in the world still exists great, even though a very distant state of one with them faith, served comfort and hope that he will protect them and, maybe someday will come Save them and return them freedom. The Sultan-Conqueror almost did not pay attention to the fact of Russia’s existence.
Russia was far away. Sultan mehmed had other worries where closer. The Conquest of Constantinople has certainly made his state one of the great powers of Europe, and from now on he has to play an appropriate role in European politics. He confessed that Christians are his enemies and he needs to be watchful to ensure that they do not unite against him. The Sultan could fight with Venice or Hungary, as well as perhaps with those few of their allies who would be able to collect the Pope, but he could only fight with one of them separately. No one came to the help of Hungary in the fateful battle of the mohačskom field. No one sent the reinforcements to Rhodes Knights-Ioannitam. No one was worried about the loss of the venetians of Cyprus.
Source: https://1gr.tv

View all posts by Katerina Gavra →
Back to blog page

Deciding where to visit depends on your entry poin